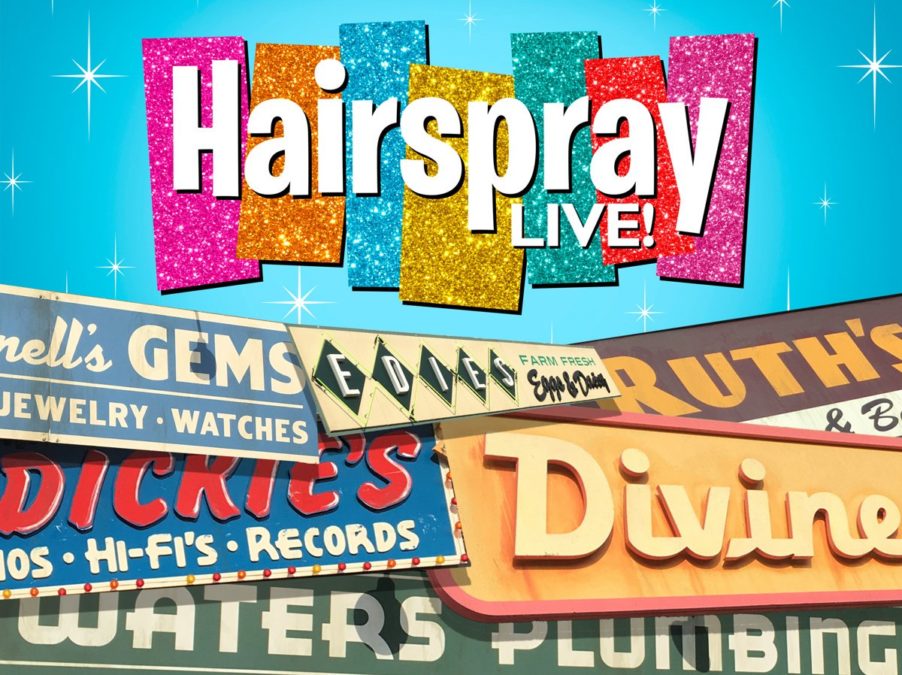 It’s a Sign! Shopping for a History Lesson on the Baltimore Streets of Hairspray Live!

When Tracy Turnblad sings and dances down the streets of Baltimore in the NBC broadcast of Hairspray Live! on December 7, viewers can see some touching tributes on the storefronts of production designer Derek McLane's realistic street scene. When Broadway.com visited the set of the TV event on the NBCUniversal lot, we couldn't help but notice that tucked between iconic plot spots like the Motormouth Records, the Har-Dee-Har Hut and Mr. Pinky's Hefty Hideaway are faux stores with a real connection to the great legacy of filmmaker John Waters, the original Broadway production and more.

SHOP: Divine Pet Food
NAMESAKE: Divine, the great drag icon who originated the role of Edna Turnblad in the 1988 John Waters Hairspray film (and died just a month after the film's release.) Waters fans will notice the extra irony of the neon flamingo on the sign, as Divine's most outrageous/disgusting/unforgettable cinematic scene happened in his Pink Flamingos and involved… um, just Google it.

SHOP: O'Donnell's Gems
NAMESAKE: TV viewers may think the jewelry store is named after Rosie O'Donnell, who will play the butch health ed teacher, but the true inspiration is Mark O'Donnell (no relation!). A comedy writer, O'Donnell made his Broadway debut with his Tony-winning book for Hairspray. He went on to adapt John Waters' Cry-Baby for the stage, but died at the age of 58 in 2012. The sign has double meaning; there's no arguing that Hairspray is a true O'Donnell gem.

SHOP: Waters Plumbing
NAMESAKE: Filmmaker John Waters (at 70, also around "since 1946") is obviously the inspiration for this storefront. With it's towering display of plungers, we can't help but find it a fitting tribute for one of our favorite potty-mouths.

SHOP: Crazy Dickie's
NAMESAKE: This electronics spot is a nod to a man who's been a regular on the stage for almost 50 years: Dick Latessa. The 87-year-old star of plays and musicals won a Tony for originating the role of Tracy Turnblad's father Wilbur in Hairspray on Broadway. As the owner of the Har-Dee-Har Hut says, "You know how many times I've been called crazy? But I say, 'Yeah, Crazy.' Crazy like a loon!"

SHOP: Bud's Duds
NAMESAKE: Winston "Buddy" Deane is the real-life Baltimore dance show host that provided John Waters with the inspiration for Corny Collins and much of the plot of Hairspray. The Buddy Deane Show aired on Baltimore station WJZ-TV and, like "The Corny Collins Show," featured a "committee" of popular dancers and set aside one day a week to feature black dancers. Waters gave Deane, who died of a stroke in 2003, a cameo in the 1988 film as a TV reporter.

SHOP: Greenblatt's Baltimore Crabs
NAMESAKE: Robert Greenblatt, the Chairman of NBC Entertainment who has spearheaded TV entertainment for Broadway fans with shows like Smash and the live broadcasts of The Sound of Music, Peter Pan, The Wiz and, now, Hairspray. Fun fact: Greenblatt also did high school theater in Rockford, Illinois with Broadway's Marin Mazzie and Joe Mantello and is a Tony-winning producer of shows like 9 to 5 and A Gentleman's Guide to Love & Murder.

SHOP: Edie's Farm Fresh Eggs & Dairy
NAMESAKE: Edith Massey, the late Baltimore barmaid that John Waters made a cult star when he cast her in films including Multiple Maniacs, Female Trouble, Desperate Living and Polyester. But it's her role as Divine's mom Edie in Pink Flamingos that's honored here. No film fan can erase the image of Masey in her undies sitting in a baby crib crying about wanting her damn eggs!

SHOP: Ruth's Place
NAMESAKE: Blues diva Ruth Brown, the first "big, blonde and beautiful" Motoromouth Maybelle in the 1988 film. Astute Broadway fans who saw Brown in her Tony-winning turn in the 1989 revue Black and Blue may remember already hearing of this hotspot. When sending a customer looking for a handout out of her thrift shop in the showstopping song "If I Can't Sell It, I'll Sit On It," Brown sang, "This is not Saint Vincent de Paul's place, this is Ruth's place!"

See all these hot spots for yourself when Hairspray Live! airs on NBC on December 7, 2016 at 8PM.