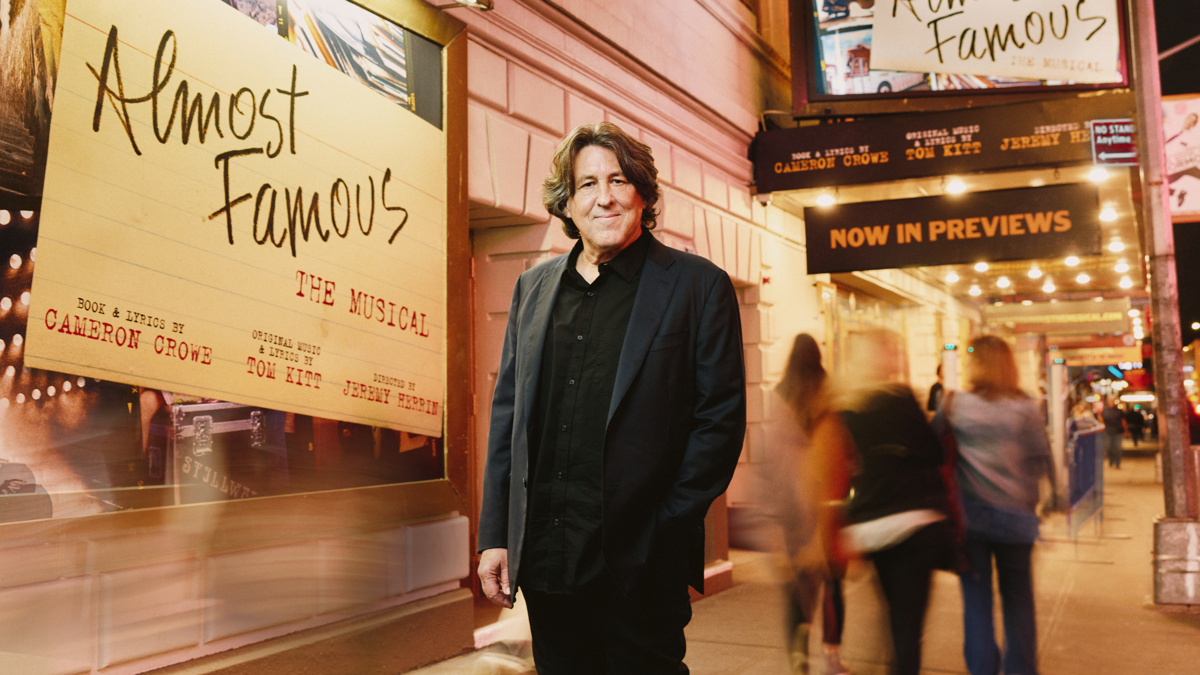 Cameron Crowe came of age writing for Rolling Stone in the early 1970s. His experiences inspired the fan-favorite film Almost Famous, which earned him an Academy Award for Best Original Screenplay. Now, Almost Famous is a fully-fledged stage musical playing at Broadway’s Bernard B. Jacobs Theatre and marking Crowe’s Broadway debut as a book writer and co-lyricist. On a recent episode of The Broadway Show, the Oscar winner sat down with Broadway.com Editor-in-Chief Paul Wontorek at Sardi’s to talk about his film career, bringing his personal story to the stage and his advice for fellow artists.

A self-proclaimed Jersey Boys fan, this is Crowe’s first foray with Broadway. “It’s a great world to be a part of, for sure,” he told Wontorek. “I love our cast. Anika Larsen is my mom. Casey Likes is me on my best day. I’m there everyday. They can’t get rid of me.”

The news of Almost Famous, the 2000 film starring Patrick Fugit, Billy Crudup, Kate Hudson, Philip Seymour Hoffman, Jason Lee, Frances McDormand and Zooey Deschanel, getting the musical treatment broke back in 2018. Crowe united with Pulitzer Prize and Tony winner Tom Kitt for the project. “I met Tom Kitt, and I’m like, ‘You’re the guy,'” he recalled. “He has such heart and enthusiasm, and he came in and was just so openly loving of Almost Famous. He said, ‘I really want this job. It’s my dream.’ I’m like, ‘Your dream is realized. Let’s go,’ and we’ve had such a great experience writing lyrics, but also just kind of channeling the feeling of 1973, that little time before everything got super mainstreamed in music. It’s good to splash around in those waters.”

In addition to Kitt’s original music, Almost Famous includes a few numbers movie and music fans will likely know and love: Elton John’s “Tiny Dancer,” Cat Stevens’ “The Wind,” Stevie Wonder’s “Higher Ground” and of course, Penny Lane’s favorite: “River” by Joni Mitchell. The 10-time Grammy winner and music icon attended opening night—her first time seeing a Broadway show!—and even was among the first to catch its premiere in San Diego, which is both Crowe’s hometown and where the fan-favorite film is set. “The first thing she said was, ‘It’s better than the movie,'” Crowe said of Mitchell’s reaction to the musical. “Jeremy Herrin was standing nearby, and he’s like, ‘Can’t argue with Joni Mitchell, now can you?'”

Throughout his career, Crowe has also created film classics like Fast Times at Ridgemont High, Say Anything…, Jerry Maguire, Elizabethtown and more. “In a way, Almost Famous should’ve been the first thing that I did, but it was still kind of bubbling up into being what it was gonna be,” he explained. “I originally wanted to write it as a vehicle for David Bowie. I loved his acting and I had written about him. He’s just everything you’d imagine. I loved the idea of him playing a kind of down-on-his-luck publicist in the same era, but there was something about the screenplay that was just kind of lopsided. But, the good fortune is because Jerry McGuire happened right before it, I was able to get all the right people to be behind the camera. We had a great cinematographer and we were able to shoot in the actual places where things happened. I always say, ‘Don’t write the movie that you think is good in the marketplace, that will allow you to do what you really want to do later. You won’t get to what you want to do later because you’re not being real to begin with.’ So, if you can tell your most personal, embarrassing story first, it just might be the thing people really hold to their hearts.”

For Crowe, experiencing Almost Famous from the seats of the Jacobs Theatre feels deeply personal: “The characters are based on real people. So sometimes, when I watch the show, I get lost in it. Sometimes people sitting in front of me will turn around when it’s over and be like ‘Are you OK?’ Oh, wait! That’s the guy!'”

Check out the full interview below and head here to check your local listings for The Broadway Show. Hosted by Emmy-winning anchor Tamsen Fadal, it is the only nationally syndicated weekly theater news program.